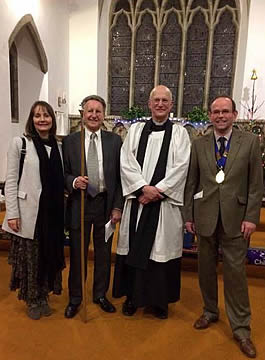 St Allen is a rural parish in Cornwall, lying between Truro to the south and Perranporth to the northwest. The main settlement is the village of Zelah. The inn here was formerly the Half Moon coaching inn, on the highway from Penzance to London,  and was renamed in the 19th century as the Hawkins Arms, to commemorate the Elizabethan adventurer Sir Richard Hawkins, who fought against the Spanish Armada. Today the main A30 trunk road bypasses the village.

In the 13th and 14th centuries St Allen belonged to the bishops of Exeter, taxed and administered by the major centre of ecclesiastical power at Glasney College, Penryn. The College was dissolved by Henry VIII and the property sold off.

In the 19th century the parish provided for miners working at East Wheal Rose mine, which lies in the adjacent parish of St Newlyn East. The primary ore extracted was Galena (lead), with commercial amounts of silver and zinc. In July 1846 the mine flooded during a heavy thunderstorm, drowning 39 miners.

The church of St Allen is thought to have been constructed in the mid 13th century, with enlargement in the 15th century. It is dedicated to St Alunus, possibly a Breton bishop. The tower is believed to be 13th century.  There  were also several nonconformist chapels in the parish.

Today the parish is mainly agricultural, with wooded valleys and some forestry, and with development of solar farms.

The road through Zelah will be closed for this event from 9am.

The race will pass through the village at 2pm.